Below are the prompts for Inktober 2021, generated by AI Dungeon.

You read them all with Lucy, who seems to really enjoy the prompts.

"These are wonderful! Thank you so much for writing them down!" She grins.
"You're very welcome."
You begin reading the prompts aloud. They are as follows:
October 1st: They're in the wrong place. They have no business being in the sky. Everyone knows whales live in the ocean. That's their home; the sky is foreign to them. Still, I wish I could get a closer look.
October 2nd: These seeds will never grow. Something about this place doesn't allow life to flourish. Everything is cold, hungry, and alone. This place is unlivable.
October 3rd:  She told me the truth. The truth about a tale of a wicked old man who masqueraded as a wonderful saint. That was the day I stopped believing in anything... except monsters.
October 4th: The way they looked at me... animals can do that, but their eyes are full of an uncaring blankness. These were different. The lights in their eyes were twisted into hatred and malice.
October 5th: I've been living alone with this curse for so long, and I'm sick of it. I need to find someone, anyone, to end my solitude.
October 6th: A drop of water landed on my head. Just one drop of rain in an ocean of despair.
October 7th: Money can't buy happiness. Whoever came up with that phrase had never spent a week sleeping outside, wondering if they'd live to see another day
October 8th: I was wrong about humanity. The world is decay. We're not meant to last. If we were, the world wouldn't be so eager to end itself.
October 9th: These hands have taken a life. These hands pour wine for kings and kiss the feet of God. These hands are filthy with the blood of the innocent.
October 10th: She told me she'd wait for me, but that was a long time ago. I still search for her, but maybe I search for the wrong person. Maybe it's really me that's disappeared.
October 11th: I've been having these recurring nightmares. Every night, I see a pale man with red eyes. Every night, he tells me to do things.
October 12th: I don't know what's real anymore. I'm writing this in a room with three people that are either dead or hate me.
October 13th: If I'm writing this, then it means I'm dead.
October 14th: Sometimes, if you stare at nothing for long enough, your eyes begin to play tricks on you.

You say "Thank you! It can be something about dinosaurs, or love, or magic, fairies and kobolds or trolls, huldras and mushrooms, I don't mind. Just not that depressing."
"But dark stories are fun," Lucy frowns.
"Perhaps. But I don't want to spend my evening depressed. So, October 9th?"
"Sure," she says. "It's your call."
"The prompts are these," you say, handing her a piece of paper.
"Thanks," Lucy says. "So, I'll go first this time. I'll start us off on October 9th."

October 9th: At the heart of a true love is a masochist who just wants to hurt themselves because they think it's funny.
October 10th: "I think I'm falling in love with you," she says. The candlelight dances in her eyes, which are dark and mysterious pools that could suck a man in and drown him.
October 11th: I met the Wolf in the woods, who told me that Little Red Riding Hood was on her way to see me. "She's barely a woman," he said. "Have you considered that maybe this isn't a sexually-motivated relationship?" I pondered his words. "No," I said finally. The Wolf looked annoyed, and stalked off into the trees.
October 12th: I married the first girl who would sleep with me. The sex wasn't even that good. Later, I found out that she was my cousin. There's a joke there, but it's too sick for me to even think about making.
October 13th: When I was a young girl, I dressed up as a princess. It was my favourite costume.
October 14th: Whenever I'm on a bus, I always sit next to an attractive man in the hopes that he's a criminal on the run, so that I can save him. I have never once succeeded.
October 15th: My sister thinks she's a vampire. It's annoying, because she keeps trying to bite me.
October 16th: I could go for some clam chowder right about now.
October 17th: My girlfriend is a ghost. It's cool because we're both immortal. Unfortunately, she burns easily, so I can't take her into the sun. Yeah, I really should have thought this through.
October 18th: I used to own a pet rat. It was sick for years, until finally it got so big that it exploded. It was the cutest exploding rat you ever did see.
October 19th: I don't understand why people are frightened of werewolves. They can only transform at night, and are mostly harmless in human form. Last night, a werewolf infiltrated my house and scratched up my couch with its claws. That was the last piece of furniture I needed for my collection.
October 20th: Last night, I dreamt that I was in Hell. I had melted, and was in a vat of hot rubber.
October 21st: I hate the future. Planes, cars, technology. It's all crap. Honestly, it's the pneumatic tube networks I hate the most. I can never figure out how to work the bleeding things. Not to mention they make it so that I can't steal packages from the mail. What's so great about the future, anyway?
October 22nd: Today I met a giant. He was wandering through the forest, singing a nursery rhyme. I hid behind a tree and watched him as he lumbered past. I wonder if he was a friendly giant or a violent one. I wish I had been brave enough to ask him.
October 23rd: The trees are all dying. The forest is stricken with disease, and the trees are like sickly, pale imitations of what they once were. I don't know how much longer they'll last.
October 24th: There's a troll in the bridge, and he won't let me pass. He wants a true answer to the question, "What do you fear most in the world?" Lots of things: Debt, commitment, spiders and answering this very question.
October 25th: "I'm lost," said the scarecrow to the lion. "Can you help me?"
"Of course," replied the lion. "But I need to eat, first."
"Oh, of course. But I daren't let you eat me! I'm stuffed with straw, you see."
"Not to worry!" beamed the lion. "I'll sip on your juices instead."
October 26th: I heard there was a virgin in the forest. I've been looking everywhere, but I can't find her. Why do all the pretty ones end up as monsters?
October 27th: Last night, I had a vivid dream that I was a cloud. I don't remember what happened after that.
October 28th: Last night, I broke into the mad scientist's lab. There were all sorts of machines in there, whirring and buzzing.
October 29th: The fairy in the woods is dead. She was brutally murdered last night.
October 30th: My girlfriend wanted to have a threesome, but instead she wound up sucking my blood. And not in the good way.
October 31th: I had a duel with a dark wizard. He conjured up a hellhound, and I went into curse him. I'm typing this with one hand, after losing the other.

Photo by Olga Thelavart on Unsplash 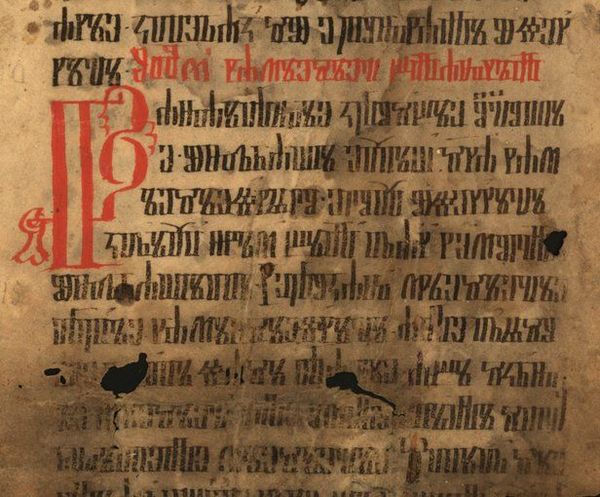 In this post, I would like to present a little side project that I have been working on recently: a creative adaptation of medieval Glagolitsa to modern Polish language.